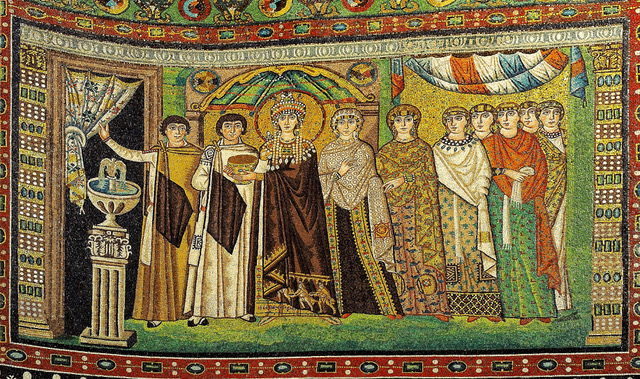 Mosaics of the world: Ravenna

If we heard the name Classe, it wouldn’t ring too much of a bell, except to the ears of history lovers and experts.

However, if we explained that Classe was the name Ravenna went by back in Roman times, the puzzle would be solved.

Not as popular today as nearby Florence or Venice, this Italian city is indeed well worth a visit. A UNESCO World Heritage Site from 1996, Ravenna houses eight ancient sites that have a mix of Arian and Byzantine mosaics so superb that rival those in Istanbul.

In Roman times, Ravenna was an imperial port for the empire´s massive naval fleet and was even, for a brief time, the capital of eastern Rome. The fact that in the mid-500s A.D. The Byzantine emperor Justinian decided that Ravenna would be the westernmostpillar of the Byzantine Empire explains why there are so many high-quality mosaics there. When it became the capital of the Western Roman Empire in 402 AD, craftsmen began to flock to the city to create dazzling, beautiful mosaics in the town´s churches and baptistries while the rest of Europe suffered through the Dark Ages. Those mosaics remain intact today.

The eight early Christian churches/monuments that qualify as UNESCO sites in Ravenna include:

The mosaics to be found in those monuments are exquisite, jaw-dropping, even. What looks like a lovely collection of tiny, bright tiles on close inspection will, when you step back, transform into a vivid image of a sea voyage, an image of Jesus, or a choir of angels.

Here are only a few of the top reasons to visit Ravenna today:

According to UNESCO the Mausoleum of Galla Placidia is “the earliest and best preserved of all mosaic monuments, and at the same time one of the most artistically perfect.” In fact, they date back to 425 AD. Galla Placidia, daughter of Roman Emperor Theodosius I, was a well-known patron of the arts. Legend has it that she had this built as a mausoleum for her and her family. Three sarcophagi are there and while no one is certain, one is said to be hers, a second belongs to her husband, Emperor Constantius III, and the third is for either Galla’s son, Emperor Valentinian III, or her brother, Emperor Honorius.

There is a brilliant blue tiled sky with the colours still so vivid that it looks like a real brandnew scarf. There are also some scenes of San Lorenzo facing the flames that supposedly inspired Dante´s Inferno, as well as allegorical designs that are meant to represent the garden of Eden. As the light shines through the dome the blue tiles shimmer creating a breathtaking effect.

The Arian Baptistry was erected by Theodoric the Great, king of the the Ostrogoths. The Goths (Arians) and the Latins (Orthodox) had different views of Christ. To keep the peace Theodoric built this baptistry “of the Arians” in order to distinguish it from the Baptistry of Neon (of the Orthodox) that had been built a century before. The ceiling mosaic with its gold tiles was remarkable.

The same man who built the Arian Baptistry, King Theodoric the Great, built the Basilica of SantApollinare Nuovo as his chapel and dedicated it to Christ the Redeemer in 504. Fifty-some years later Justinian I changed its name to Saint Martin in Golden Heaven and dedicated to Saint Martin of Tours, a foe of Arianism. It earned its present name in the 800s when some relics from Saint Appolinaris were transferred here.

This Basilica features 26 scenes from the New Testament. The gold mosaics that show Jesus and depict various of his miracles are indeed stunning.

The Basilica of San Vitale is the best known and most popular of UNESCO’s eight sites. Its Byzantine mosaics are the largest and best preserved outside of Constantinople.

The church ́s exterior is pretty plain, but inside you will find some of the finest examples of Byzantine artwork anywhere in Italy.

In San Vitale, mosaics are everywhere. They are on the floors, on the walls, arches, and on the ceilings. And they are all exquisite, to use an understatement. Some of these mosaics show portraits of Roman Emperor Justinian as well as his wife Theodora. You will also find lots of birds, wildlife and other religious personas of the time decorated along the ceilings. San Vitale is said to have been the model for Constantinople Hagia Sophia, built 10 years later.

The technique used in ancient mosaics is still performed and taught today at various schools. It is called the Double Reverse Technique or “Ravenna Technique”. It is in fact a 1500 year old method, handed down from the Roman/Byzantine times, currently used by many Italian professional mosaicists (Maestri), and restorers. Typically this method is applied when it is important to see the work during the creation process, as it will appear when completed. The operator can constantly control the final result of the work, which is important especially in human figures. Briefly, the tesserae are set into a temporary bed of putty, slaked lime, or clay, where they can be placed and moved at will until the desired effect is achieved. The temporary bed will remain moist for a long time, even months as long as it is covered with plastic. That means you can leave it, and come back to it when you are ready to work again.

Once finished, the mosaic is lifted (Strappato), cleaned, and glued on its final destination, typically wooden board, furniture, objects… In Ravenna the tesserae are still cut by using traditional tools.

Although Ravenna is best known for its mosaics, there are other facts and curiosities worth taking into account. For example, Dante is most famous for his Divine Comedy, but few people know that he was exiled to Ravenna as a result of his famous work and he was buried there in an elaborate tomb. Rumour says, though, that grave robbers stole his bones to rebury them in his native Florence.

Because Ravenna was left off the ancient Roman road (the Via Aemilia) and even today is not connected to Italy´s large highways, the small town is peacefully quiet, remote and well preserved.

First and foremost, Ravenna is an art history lover´s dream inviting us all to a visit!