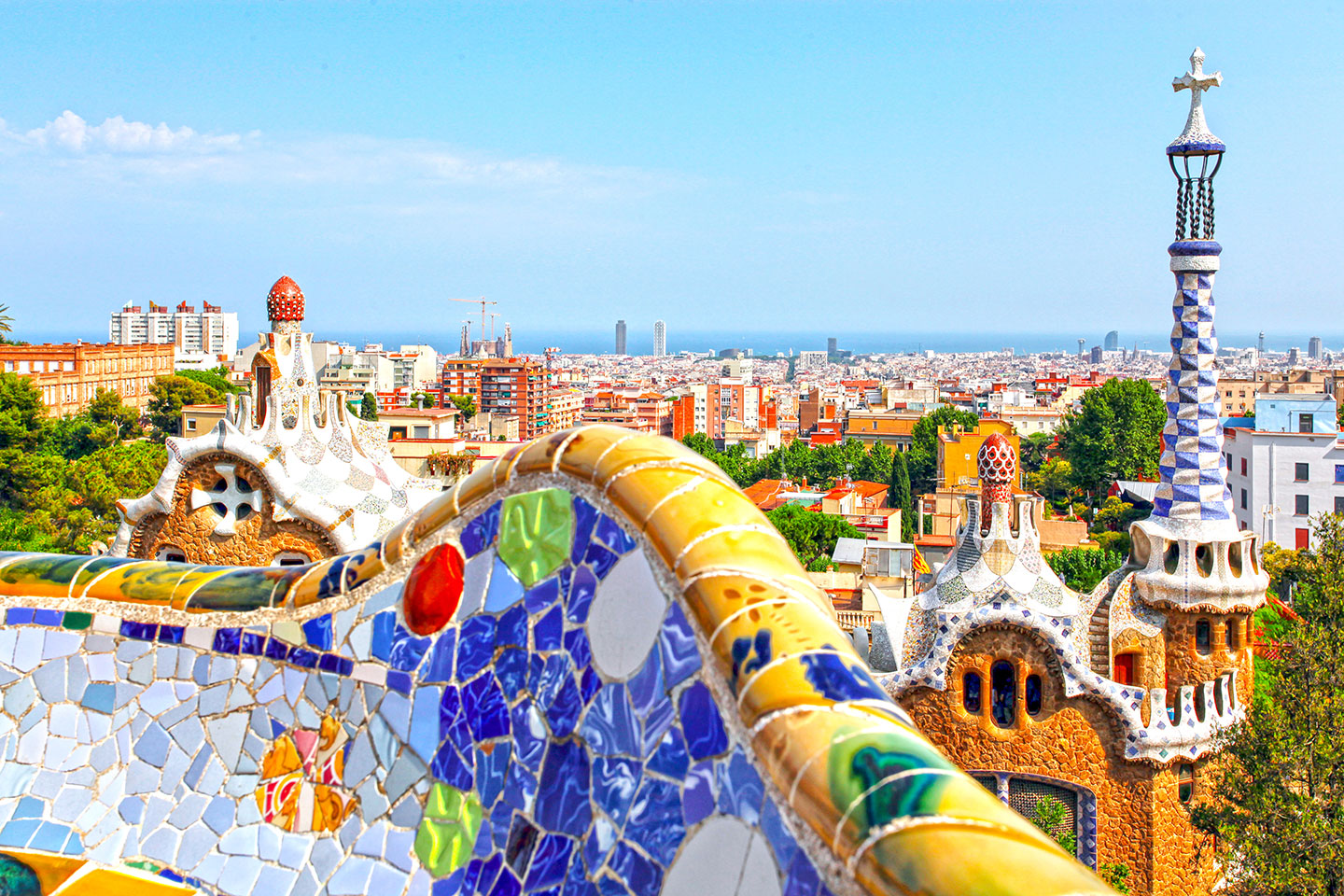 MOSAICS OF THE WORLD: PARK GÜELL

Whether you’re a modernist art aficionado or simply someone who enjoys the outdoors, there is no better way to spend a day than marveling at the incredible mosaic masterpiece of Antoni Gaudí’s Park Güell.

Located in Carmel Hill, Barcelona, Park Güell is home to numerous gardens and architectonic features. Built during the years 1900-1914, Park Güell was created on the premise of the Modernism art movement which dominated the city during this time period. Also known as Catalan modernism, this genre primarily encapsulated architecture in addition to art and literature. Due to the Universal Art Exhibition of 1888, Barcelona was revealed as a dynamic city exploding with urbanism and artistic promise, which ultimately led to the success of the modernism art movement.

Therefore Park Güell was a result of this movement and created in collaboration between entrepreneur Count Eusebi Güell and Antoni Gaudí, a renowned architect and the face of Catalan modernism.

Güell understood better than any of his contemporaries the meaning of Gaudí’s architecture. The relationship between the two men was not simply that of an artist and his patron, but a real story of friendship.

For many years the Güell family lived in the large family house (now a school) that stood on the land where the development was located, while Gaudí lived in one of the two houses that were built there.

Initially the park was built on the premise that people would buy plots in order to fund its creation. However in 1914, a lack of buyers led to the completion of only two of the initially planned sixty houses and forced Güell to convert the park into large private garden used for public events.

In the businessman’s own lifetime, the park was already considered to be one of Barcelona’s great tourist attractions, and the large square was often let for staging Catalanist events, traditional Catalan sardana dancing and other civic and social events.

When Eusebi Güell died in 1918, the park was purchased by the City Council on May 26th 1922, and in 1926 was opened as a municipal park. Park Güell was recognised as an artistic monument in 1969 and declared a UNESCO World Heritage Site in 1984. Nowadays, Park Güell welcomes over 9 million people each year. This massive number is a clear indication of the park’s prominent status in Barcelona and is an impeccable example of one of Gaudí’s striking masterpieces.

Park Güell is the reflection of Gaudí’s artistic plenitude, which belongs to his naturalist phase (first decade of the 20th century). During this period, the architect perfected his personal style through inspiration from organic shapes. He put into practice a series of new structural solutions rooted in the analysis of geometry. To that, the Catalan artist adds creative liberty and an imaginative, ornamental creation. Starting from a sort of baroquism, his works acquired a structural richness of forms and volumes, free of the rational rigidity or any sort of classic premises. In the design of Park Güell, Gaudí unleashed all his architectonic genius and put to practice much of his innovative structural solutions that would become the symbol of his organic style and that would culminate in the creation of the Basilica and Expiatory Church of the Holy Family (Sagrada Familia).

Together Güell and Gaudí conceived this park, situated within a natural park. Not only did they imagine an organized grouping of high-quality homes, decked out with all the latest technological advancements to ensure maximum comfort, finished off with an artistic touch. They also envisioned a community strongly influenced by symbolism, since, in the common elements of the park, they were trying to synthesize many of the political and religious ideals shared by patron and architect: therefore there are noticeable concepts originating from political Catalanism– especially in the entrance stairway where the Catalan countries are represented – and from Catholicism– the Monumento al Calvario, originally designed to be a chapel. The mythological elements are so important: apparently Güell and Gaudí’s conception of the park was also inspired by the Temple of Apollo of Delphi.

The multiplicity of symbols found in the Park Güell is, as mentioned, associated to political and religious signs, with a touch of mystery according to the preferences of that time for enigmas and puzzles.

The park was inspired by the English garden city movement; hence the original English name Park (in Catalant the name is “Parc Güell”). The site was a rocky hill with little vegetation and few trees, called Muntanya Pelada (Bare Mountain). The intention was to exploit the fresh air (well away from smoky factories) and beautiful views from the site, with sixty triangular lots being provided for luxury houses. Park Güell was designed and composed to bring the peace and calm that one would expect from a park. Count Eusebi Güell added to the prestige of the development by moving in 1906 to live in Larrard House. Ultimately, only two houses were built, neither designed by Gaudí. One was intended to be a show house, but on being completed in 1904 was put up for sale, and as no buyers came forward, Gaudí, at Güell’s suggestion, bought it with his savings and moved in with his family and his father in 1906. It contains original works by Gaudí and several of his collaborators. It is now the Gaudi House Museum (Casa Museu Gaudí) since 1963. In 1969 it was declared a historical artistic monument of national interest.

The large cross at the park’s high-point offers the most complete view of Barcelona and the bay. It is possible to view the main city in panorama, with the Sagrada Família and the Montjuïc area visible at a distance.

By far, though, the main focal point of the park is the main terrace, surrounded by a long bench in the form of a sea serpent. The curves of the serpent bench form a number of enclaves, creating a more social atmosphere.

Antoni Gaudi’s trencadis mosaic tile bench at Park Guell is indeed a major tourist attraction in Barcelona’s Gracia district. Trencadis ( from Catalan trencadís, meaning “chopped”)is a type of mosaic using broken tiles and was popular with the Catalan modernism style. Gaudi used this style in many of his designs. The serpentine mosaic bench at Park Guell is an exceptional example of mosaic tile used in a functional architectural design. Part of the planning included drainage holes where the backrest and seating area meet up. This allows the rain to flow away rather than settling on the bench.

To create the bench Gaudi utilized discarded tiles from a nearby factory.

Of course all of the bits and pieces in a mosaic must fit together somehow. Each piece finds it’s place within the tile bench. The beautiful thing with trencadis style mosaic is that the tiles need not match in exact color or style, although there are many sections of the serpentine bench where the design is clearly planned and executed.

Trencadis mosaics are not only used in architectural features in Park Güell, but also in outstanding ornaments and decoration items: